Given current trends, the U.S. gas turbine industry is set to play a critically important role in power generation, aircraft propulsion, and the oil and gas industry “for decades to come,” but it could benefit from prioritized research and development (R&D) and technological leadership, a new publication from the National Academies of Sciences, Engineering, and Medicine concludes.

The publication, Advanced Technologies for Gas Turbines, released earlier this month, stems from a request from the U.S. Department of Energy (DOE) that the National Academies of Sciences, Engineering, and Medicine—a private, nonprofit institution that provides expert advice to the government on pressing challenges—form an ad hoc committee to identify high-priority opportunities that could create and improve advanced technologies into the design and manufacture of gas turbines to improve their efficiency and life-cycle costs. The committee assembled by the National Academies’ Aeronautics and Space Engineering Board, which is part of its Division on Engineering and Physical Sciences, met four times during 2018 and 2019. It was ultimately tasked with identifying improvements that could be achieved by 2030.

According to the report, the committee assessed the 2030 gas turbine global landscape, scrutinizing global leadership, market trends, and technology trends that would affect gas turbine applications to identify specific research goals. It also developed a prioritization process as well as high-priority research areas that were the most relevant to achieving its goals.

As part of its assessment, the report sought to answer key questions about future gas turbine customers, which is specifically significant for the power industry because it continues to grapple with a series of disruptions. It concluded that global market drivers suggesting strong growth opportunities for gas turbines include expanding demographics; a significant need for energy security and resilience; a movement toward decarbonization (driven by climate policies and standards as well as company goals) which could boost more widespread adoption of renewables, storage, and electric vehicles; and competition and customer profiles.

Meanwhile, among major trends it found that could define the technological environment in which gas turbine research and development could thrive are: inexpensive, large-scale computational capabilities; highly autonomous systems; additive manufacturing; artificial intelligence; and cybersecurity.

Assessing these factors, the committee determined that to efficiently improve and create advanced technologies that can be quickly introduced into gas turbine designs and manufacturing, the DOE (and other government agencies), industry, and academia should prioritize research goals. Using performance improvement, technical risk, and breadth of application as key criteria, it ranked goals for the power sector as follows:

Efficiency gains.Increasing combined cycle gas turbine (CCGT) efficiency to 70% and simple cycle efficiency to more than 50%. The report notes that these gains may be achieved by “higher cycle pressure ratio and higher turbine inlet temperature,” and that turbine inlet temperature is perhaps the most important design parameter for efficiency improvements. Life-cycle costs, meanwhile, may receive a boost via technological advances, such as in additive manufacturing and rapid prototyping. It also notes that: “Changes to the underlying configuration of the turbine maybe required. Development, testing, and validation may be paced by the ability to design and manufacture the necessary hardware. Solutions may require new materials, which have historically required longer development timelines.”

Compatibility with Renewable Energy Sources. Reducing turbine start-up times and improving the ability of gas turbines operating in simple and combined cycles to operate at high efficiency while accommodating flexible power demands and other requirements associated with integrating power generation turbines with renewable energy sources and energy storage systems. The report notes, specifically, that power generating gas turbines will “need to ramp up faster and overfire [operate at a temperature higher than designed] more frequently. In addition, modes of operation that have not been considered in the past will be increasingly important. For example, some gas turbines will likely be required to operate in hybrid power plants, where they will need to work in a symbiotic manner with solar power generation and fuel cells.”

Slashing CO2 Emissions. Reducing CO2 emissions to “as close to zero as possible” while still meeting nitrogen (NOx) emission standards. A key challenge gas turbine makers face is that “New gas turbine designs that reduce CO2, however, will not be competitive if they come at the cost ofdecreased performance or if they prevent gas turbines from meeting standards for NOx and other harmful emissions,” the report says.
Ramping up Fuel Flexibility. Enabling gas turbines for power generation to operate with natural gas fuel mixtures with high proportions (up to 100%) of hydrogen and other renewable gas fuels of various compositions. However, the report notes that while several gas turbine manufacturers are currently developing turbines that can burn 100% hydrogen, ramping up hydrogen volume comes with several challenges that could “perhaps be the most difficult to overcome.”

Levelized Cost of Electricity. Enabling reductions in the levelized cost of electricity from power generation gas turbines to ensure that these costs remain competitive with the cost of solar and wind power systems over the long term. While LCOE is a problematic parameter in comparing technology costs,  it is becoming “key criteria to determine whether a utility company decides to purchase and operate a gas turbine,” the report says. “It is likely that sales of gas turbines will be negatively impacted once the cost of renewable energy is consistently undercutting the cost of gas turbines. Two recent assessments predict that this could happen in the 2020 to 2024 time frame.”

Research Areas that Could Change the Trajectory for Gas Turbines

1. Combustion. The committee urged that stakeholders enhance “foundational knowledge” needed for low-emission combustion systems that (1) can work in high-pressure, high-temperature environments that will be required for high-efficiency cycles, including constant pressure and pressure gain combustion systems; and (2) have operational characteristics that do not limit the gas turbine’s transient response or turndown (i.e., ability to operate acceptably over a range of power settings), with acceptable performance over a range of fuel compositions.

2. Structural Materials and Coatings. Develop (1) the technology required to produce ceramic matrix composites (CMCs); (2) advanced computational models; and (3) advanced metallic material and component technologies that would improve the efficiency of gas turbines and reduce their development time and lifecycle costs.

3. Additive Manufacturing for Gas Turbines. Integrate model-based definitions of gas turbine materials (those already in use as well as advanced materials under development), materials processes, and manufacturing machines with design tools and shop floor equipment to accelerate design and increase component yield while reducing performance variability.

6. Unconventional Thermodynamic Cycles. Investigate and develop unconventional thermodynamic cycles for simple and combined cycle gas turbines to improve thermal efficiency, while ensuring that trade-offs with other elements of gas turbine performance, such as life-cycle cost, are acceptable.

7. System Integration. Improve, modify, and/or expand the conventional gas turbine architecture (i.e., a compressor module, combustor module, and turbine module on a common shaft in the direction of gas flow) to enable the development of gas turbines with higher performance and/or greater breadth of application.

8. Condition-Based Operations and Maintenance. Develop technologies that will improve operation of gas turbines by reducing the amount of scheduled and unscheduled maintenance, thereby reducing unscheduled shutdowns.

9. Digital Twins and Their Supporting Infrastructure. Develop the capability to generate enhanced digital twins and a digital thread infrastructure that supports them.

10. Gas Turbines in Pipeline Applications. Investigate (1) opportunities to improve the efficiency of gas turbines in pipeline applications exposed to extended periods of partial load operation and (2) the safety implications of gas turbines with a substantial percentage of hydrogen in the fuel.

Of specific note is report’s interesting observations about the state of U.S. gas turbine R&D. Because their technical characteristics offer “important technological and economic growth potential,” countries across the globe are heavily investing in gas turbine R&D, such as the European Union’s (EU’s) Clean Sky 1 and 2 programs, which were initiated in 2008 and 2014. China in 2016 also launched its state-controlled Aero-Engine Group, which is backed by $7.5 billion in capital to develop military and commercial engines, and it has since launched a domestic heavy-duty gas turbine development program to bolster its electrification and decarbonization efforts. But in the U.S., the report points out, DOE research has been constrained by a budget of about $15 million to $20 million annually since 2015. The DOE’s fiscal year 2021 budget request released on Monday, for example, scales back tremendously on its Natural Gas Technologies program (cutting funding from $51 million asked for last year to $15 million). 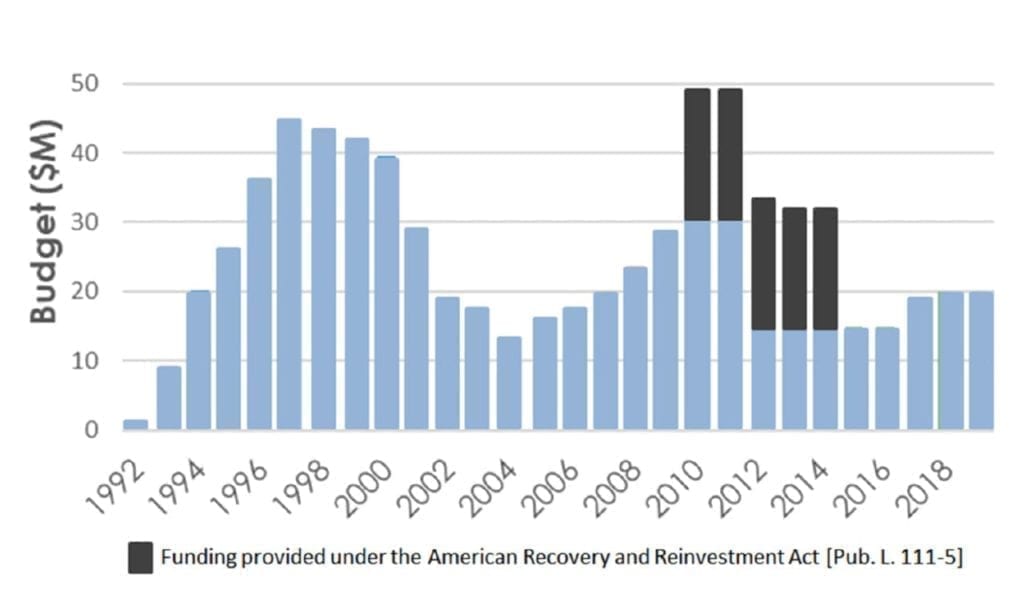 The report urges continued investments in gas turbine R&D, but it also pointedly calls for “technological leadership,” noting that the U.S. is the principal exporter of gas turbines with an export value of $32 billion in 2017. Gas turbines represent a $90 billion global market, it says.